The history of this unique community began in the 1960s, when a Russian hierarch from the Russian Orthodox Church Outside Russia (ROCOR)–Archbishop Serafim, who was passionately devoted to promoting Russian Orthodoxy and culture through work with children, conceived the idea of creating a youth organization and a children's summer camp in his diocese.
Once, in May of 1961, George Soldatov and Vladyka Seraphim, set off to find a location not far from Chicago for an Orthodox summer camp for children. After inspecting several sites and not finding anything satisfactory, they decided to return home. As they were turning back, suddenly they came upon a property with a beautiful lake, a surrounding wooded area, and a "for sale" sign." It turned out to be a 70-acre farm which included a 4-acre lake and 3 acres of woods; the farm was called "Lost Lake."
Back in Chicago on the following Sunday, Vladyka Seraphim announced to the parishioners of the Pokrov Cathedral that there would be a picnic at the newly-found site for an inspection. The parishioners were immediately attracted to this picturesque property and many of them agreed to invest their money for the purchase of lots. A portion of the land was given to the newly-founded, ORPR Youth Camp, while the remaining 50 acres were divided into lots and sold to the parishioners. Sergey Sergeyevich Belosselsky-Belozersky (1898-1978), a Russian prince who immigrated to the United States after the 1917 Revolution, generously supported the acquisition of the Lost Lake farm. The farm was named "Vladimirovo" in honor of St. Vladimir who brought Orthodox Christianity to Kievan Rus'. The streets of the new Russian community were named after famous Russians, such as St. Serafim of Sarov, Alexander Pushkin, Igor Sikorsky, and Piotr Tchaikovsky. The new name "Vladimirovo" was added to the original name of the farm–"Lost Lake."
This is how the The Lost Lake-Vladimirovo Property Owners' Association came into being. It is incorporated as a Not-for-Profit Corporation in the State of Illinois and is administered by an elected Board of Directors who adhere to bylaws created for the Association. The dwellers of this community are no longer all of Slavic origin but many are second and third generation children of the original settlers. ​ 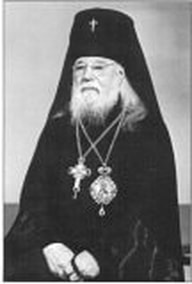 His Eminence, the Most Reverend Seraphim (Ivanov), Archbishop of Chicago and Detroit.